Congratulations to the new Raven magazine that was launched this month. The first issue is beautifully designed. Kudos also for reporting on a scientific survey about Pedestrian Day opinions. The reporter clearly explained issues with the previous surveys (which we wrote about in an earlier post). There is also an attempt to use charts for telling the story, and I am a big fan of charts as storytellers. However, creating effective charts requires more than Excel skills.

With all this good work, the last mile is to replace the current ineffective and confusing charts with effective ones. Below are some charts from the article on Pedestrian Day. Start from this chart. What does it teach us? 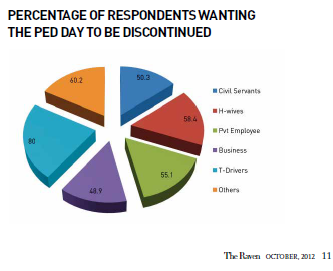 The pie chart is trying to convey the "percentage of respondents wanting Ped Day to be discontinued". A main feature of a pie chart is that its parts should add up to 100%. Yet, the percentages on the slices here do not add up to 100%, causing confusion. A careful look uncovers that the person creating the chart was trying to convey the percentage separately for each sector. If that's the case, then the pie chart is not set up correctly! You would need separate pies for separate sectors (civil servants, H-wives,...), and then each pie would have a breakdown of  that sector's opinion of Ped Day. Using a pie chart incorrectly is very misleading.

But even using a pie chart correctly is known to be ineffective at best, and misleading at worse. Our brain is not good at comparing sizes of pizza slices. With 3D pizza slices, we are even worse off! The best solution: use a bar chart.

Here's a simple bar chart of the same data, using Excel. See if you get a better idea of responses to this survey question by different sectors (by the way, might a truck driver also be "Business" or "Pvt Employee"?) 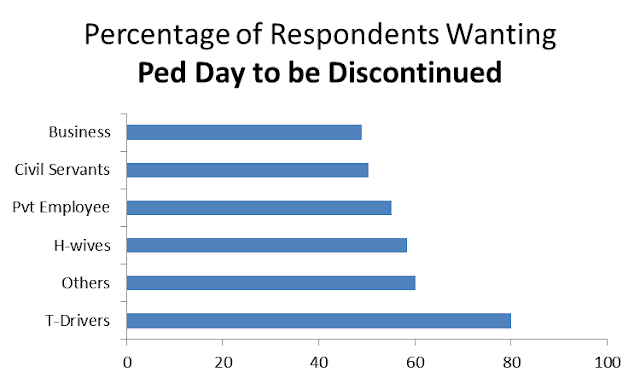 While we're on the subject of 3D charts, you can ruin a perfectly effective bar chart by turning it into a 3D bar chart, as you can see in the following charts (from the same article). I included the original 3D chart alongside an ordinary bar chart of the same data, which I created in Excel. Not only is there no need for the third dimension (it does not represent any information in these cases), but it makes the comparison between bars much more difficult on our brain.


Creating effective charts is not rocket science and does not require expensive software. It does require learning key principles and implementing them meticulously. The media should invest in training editors and reporters in effective data presentation -- not only creating effective charts, but also being able to critically assess charts presented by their sources.