Yesterday's Kuensel article "Bhutanese are becoming fat and unfit" reported on the results of a health check up on International Happiness Day of 1,580 people. While the topic is extremely important, the article was confusing and somewhat misleading due to lack of important information about the sample and ineffective communication of the results. Here are some issues that I had trouble figuring out:

1. Who are the "1,580 people screened for lifestyle related diseases in six hours" and how were they chosen? It is important to understand whether the sample is representative of "Bhutanese", as the article title claims. Are these people who visited the hospital in Thimphu? Are these Thimphu residents only? 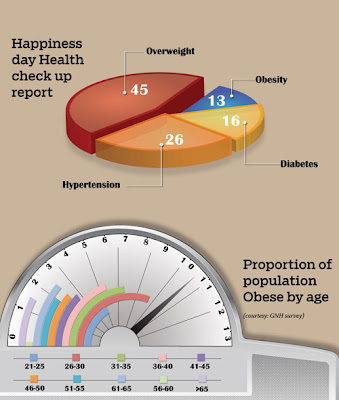 2. The results of this checkup are shown in the top chart. But what is this colorful 3D pie chart telling us? Here's what it is not telling us, and therefore misleading the viewer:


3. Reporting of numbers requires telling a story that is meaningful. When we hear statistics, we try to make sense of them by comparing them to some benchmarks or to each other. So, sentences must be coherent and meaningful. For example, what does the following sentence tell you, and how does this information match the pie chart?

4. A chart based on the (2008  or 2010?) GNH survey is attached right below the Happiness Day checkup pie chart. But I only understood that the two charts are from different data sources (and periods) after spotting the tiny text "(courtesy: GNH survey)" and reading the article carefully.

5. But wait: While the chart is trying to tell the story of obesity by age group, it conceals and distorts more than it reveals:

In short: A simple bar chart with straight bars, one for each age-group, ordered from young to old, would have been a better choice. And larger annotation telling us that this is based on a different dataset from a different source and period.

Lastly, in order to show a trend ("becoming unfit"), I'd like to see numbers and charts showing the increase over the years.

Email ThisBlogThis!Share to TwitterShare to FacebookShare to Pinterest
about Charts, Data Visualization